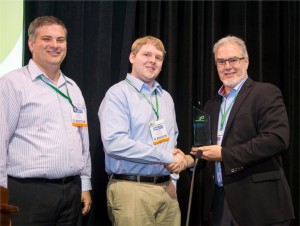 How does Ripple use Internet Technology?

The device uses 6LoWPAN for integration. The device currently uses a simple UDP protocol to send data to a generic broker. Use of the Internet Protocol allows us to build on this early design and incorporate additional capabilities, such as publishing through the u

se of Message Queueing Telemetry Transport for Sensor Networks (MQTT-SN) for integration with a variety of middleware products, RPL for multi-hop routing, and DNS or Zeroconf for automated service discovery.

When we were considering potential product designs, we noticed that most low power physiological monitoring products are limited in their potential uses by the form of communication that was used. For instance, the choice of Bluetooth would work great for applications where the user had a smartphone available to them to act as a gateway, but would not be as useful in emergency response applications where a patient would not have this gateway available to them. We also noticed that in virtually all of these use cases, some form of IP network was available to leverage. Even tactical radios that would be used by emergency responders or by the military now use the Internet Protocol for communication, so a well designed, low power device using 6LoWPAN has the potential to be integrated across a wider range of use cases.

Why did you choose to invent Ripple? What problem do you see that it can solve?

The need which the product was designed to address came from U.S. Air Force Pararescue community. An ideal patient monitoring product would facilitate all emergency responders being able to monitor all patients during a mass casualty response.

The existing wireless physiological sensing products can be found in basically three forms. Bluetooth is used in applications where it is practical for patients to have a smartphone with them at most times; 802.11 is used in applications where it is feasible for the devices to be bulkier and supplied with more power; proprietary forms of wireless are typically used in applications where a variety of devices need to be connected, as would be the case in a hospital. Pararescue and emergency responders need devices that are small and low power like bluetooth sensors, but they also need more complex network topologies that connect a large number of sensors and monitoring devices over a single network and allow for patients to be handed-off without having to reconfigure networks. We found that 6LoWPAN offered all of these qualities. It is low power, which is great for physiological sensors, but it can also be attached to other IP networks, so it can be integrated into almost any environment. 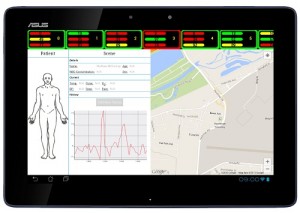 Specifically, we wanted to build a devices that could be used anywhere so that it could be commercially viable, but we also wanted it to be designed so that it would be a valuable tool for emergency responders during a mass casualty event.

What is the practical application of Ripple for the everyday user?

While many components of Ripple, such as our user interface, are specifically designed for a military mission, the combination of physiological sensors with 6LoWPAN communication can be used across all areas of healthcare where low power wireless patient monitoring is being employed. The transition from proprietary networks to open and standardized networks would lead to reduction in costs and improved interoperability.

Are there plans to produce Ripple for the marketplace, or is it already a product that can be purchased/obtained?

All of our software is open source and available free to anyone on Github.com (https://github.com/ProjectRipple). As a research organization, our primary goal is to research new ideas and demonstrate improved capabilities. We want to support commercialization but need to partner with the right companies to do so. We have some existing partnerships, but we also want to find further opportunities to support Ripple’s medical monitoring vision.

Why would you consider Ripple to be “innovative”?

Ripple is definitely innovative. Prior to development, the marketplace was exhaustively searched for portable monitoring products that were low power, capable of maintaining connections across patient handoffs, capable of any-to-any communication, and incorporated open communication standards. Ripple was only initiated after finding that the marketplace did not present viable commercially available alternatives.

It would be beneficial if the makers of wireless networking infrastructure products (access points, routers) would begin to include a low power subcomponent like 802.15.4/6LoWPAN in their products. Once the infrastructure is readily available in homes, hospitals, and other buildings, then the device makers will build low power products that utilize the existing infrastructure. 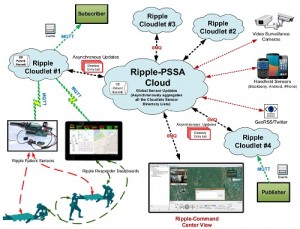 Want to check out the other entries?  Watch all 10 IPSO CHALLENGE 2014 Semi-Finalist Entries!