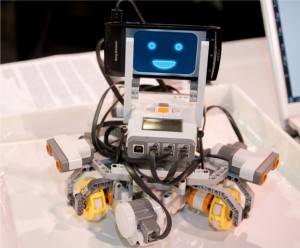 GameReality has developed an Internet Protocol enabled first person shooter (FPS) game that allows players to remotely control real-life holonomic combat robots over the internet based on an Android app. Players are given a real time video feed which enables them to control the paintball or laser tag equipped robots that are located in another city or country and hunt down other robots or players. Their goal is to develop the first game to bring real people into an FPS world, giving gamers the opportunity to earn money by developing robots for use both in the game and in reality – GameReality.

How does GameReality use Internet Technology?

A robot equipped with an Android smartphone or a networked video camera is remotely controlled and streams real time video to GameReality’s cloud service. The user interface is web based and you control it using classic computer game style WASD keys and a mouse. By using the GameReality Android app, it is possible to remotely control just about anything over an IP connection, such as the Internet. Any Bluetooth product can be controlled through the Android app over the Internet.

Why did you choose to invent GameReality? What problem do you see that it can solve?

Our vision is to implement Internet-based “teleportation” which reduces the need for commuting and can instantly provide a doctor, police, firefighter or plumber in your house in an emergency. With a remotely controlled humanoid robot in your home you can have any person with any skills present in seconds in your home. 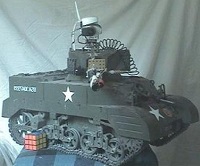 You don’t have to move to another country to get a job. You don’t have to work night shifts. Carbon dioxide emissions are drastically reduced. The list of benefits goes on. The first implementation of the GameReality technology is a remote robot fighting game which gives the users the opportunity to fight others’ robots and even make some money in the process.

What is the practical application of GameReality for the everyday user?

Right now the application is robot gaming. Longer term, it can be anything robotic. The technology allows anything with sensors and actuators to be remotely controlled over an IP link, such as the Internet. Since the technology is based on IP, it is completely independent of connectivity (Wi-Fi, Bluetooth, etc.) GameReality also has plans for a completely virtual environment where robots can be designed, programmed and built without physical parts. Once perfected, they can become real using 3D printing technology and similar construction tools. 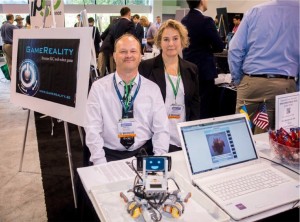 Magnus and Marlene of GameReality

Are there plans to produce GameReality for the marketplace, or is it already a product that can be purchased/obtained?

The first working prototype was developed in 2005 and new users can use construction kits like the Lego Mindstorm to inexpensively build new robots. The Android application is free and, for developer boards such as Arduino or Raspberry Pi, our open source client software can be used. A beta version of the service was tested in 2005-2006 at www.gamereality.se. The testing attracted the attention of DreamHack, which we were invited to attend during the summer of 2005 to participate in a global trial. Currently, over 1500 people from around the globe have used the robots available through GameReality.

Why would you consider GameReality to be “innovative”?

To the best of our knowledge there are no other remote robot control services on the web. GameReality combines a number of well established, stable and standardized technologies (IP, Android, web, video streaming, etc.) to create a completely new service and business model.

The future is in connected things. I want to be able to supervise, collect data and control anything I own by using my mobile phone. In the future customers, will look for this kind of connectivity in products and any products without it will simply not sell.