The UPOE Light Over Ethernet unit make it possible to supply power to LED lights especially ceiling light in offices with Cisco developed high power PoE(Power over Ethernet), UPOE, which is on a way to a standard. Now the unit got IPv6 capability, that is, lighting system can become controlled/monitored from IP networks. This product would be the first step that everything in the world which was ever isolated from the network becomes internet reachable. 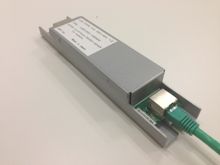 How does your Smart Object/Solution use Internet Technology?

At a glance, the LOE UPOE unit is just a fluorescent ballast, it has capability of IPv6, TCP and HTTP. IPv6 capability includes almost full set of neighbor discovery.

Why did you choose to invent this? What problem does the inventor see that it can solve?

Once the unit has IP capability, the unit can be controlled from anywhere and doesn’t need any middle boxes to convert any protocols to the original UPOE LOE unit specific protocol. In addition, since IPv6 is implemented this time, you don’t need to care address scope that some times require network address translation technologies.

What is the practical application of your innovation for the everyday user?

Lighting System. But the essence of this innovation was success of porting IPv6 onto PIC18F microcomputer which has just too poor resources but enough cheap to be embedded inexpensive commodity goods. This implies commodity goods could be IPv6 reachable in near future.

Did you invent new technology? How is your device unique?

Not invented much, but making the units (and lights) internet reachable is a great step.

What hurdles did you overcome in creating your device? Were necessary parts easily obtained?

The original device uses PIC18F micro computer as its controller. That was enough for the original usage when this hardware was planned. I ported Contiki OS to the micro computer. Contiki was well designed operating system for embedded systems, even though, Microchip PIC18F microcomputer’s resource was too restricted.

Memory is just 3808 bytes which includes packet buffer (typically 1280-1500bytes per packet). Besides the packet buffer, the memory should be used for IPv6 address management, neighbor cache, TCP connection management, HTTP and socket buffer management, process status, real time clock counter so on. Moreover, the microcomputer architecture was something odd and development tool (IDE, debugger, compiler) was too buggy.

When I plan to ports Contiki OS to this chip, I thought memory was restricted but it would be possible to port relatively easy. Looking back, however, it was something tough way.

Are there plans to produce your entry for the marketplace, or is it already a product that can be purchased/obtained?

The hardware itself is already in market.

Why would you consider your device/solution to be “innovative”?

Not IT devices such as PC, Tablet and Smart Phone but building facilities that were used since a century ago become now internet reachable and supplied power with only single cable by the technology Universal POE.